Paired with wireless sensors and cameras, aerosol pheromone pesticides have entered a new era of effectiveness and affordability keeping pests away.

There’s definitely something in the air at John Freese’s cherry, apple and pear orchards in Central Washington. And that something is a cloud of pheromones—one that means fewer pesky moths snacking their way through his fields. For the past year, the fourth-generation fruit farmer has been testing Semios, a pheromone-delivery and precision farming system that uses wireless sensors and cameras to help growers monitor their crops remotely. The network of tiny cameras and data collecting monitors keeps tabs on the fields and weather conditions. Strategically placed canisters routinely spray the trees to prevent infestations.

Last year, Freese hung several thousand Semios cartridges on trees across 100 acres of orchard. During peak insect mating seasons throughout the year, for up to 12 hours a day, the dispensers fire off pheromone mistings every 15 minutes. These biopesticides don’t kill insects, but they do disrupt breeding. Farmers using Semios schedule sprayings by using the company’s full suite of remote in-field monitors and weather stations that help measure wind and moisture levels, as well as pest traps, which track insects’ lifecycles.

“Mating disruption is not exciting,” Freese concedes. “If it works, you don’t see anything.” And that is what makes it a profoundly useful tool for fruit and nut growers trying to protect their farms.

Confused by the presence of pheromones in the air, male insects are unable to locate a mating partner and give up. For Freese, that’s meant contending with far fewer codling and Oriental fruit moths, the top two global pests for apples and pears that also attack other types of tree fruit, including apricots, peaches and quinces. Aside from some automatic misters in the trees, which look a bit like industrial-grade outdoor air fresheners, there’s no way to tell an orchard is managing pests by messing with their reproductive lives.

Michael Gilbert, the founder and CEO of Vancouver-based Semios, is a chemist with two decades of experience concocting, manufacturing and managing the distribution of pharmaceutical products based on naturally occurring substances. After stints at Merck and Cardiome Pharma Corp., where he managed the research and development of cardiovascular and other medications, he was bitten by the entrepreneurial bug and started looking into the class of chemicals known as pheromones.

Developed in earnest after the Environmental Protection Agency banned the use of DDT in 1972, biopesticides include everything from fungal pesticides that contain bacterium that kill specific insects to biochemical products, such as pheromone pesticides. In 1994, the EPA established the Biopesticides and Pollution Prevention Division within the Office of Pesticide Programs in order to facilitate the registration of biopesticides. As of 2014, the EPA reported more than 430 registered biopesticide ingredients and 1,320 products. As biopesticides are generally considered less toxic than chemical pesticides, the EPA review and approval process takes considerably less time. Biopesticides are typically approved in less than a year versus the typical three years it takes to for a chemical product.

In recent years, organic and traditional farmers have increasingly used pheromone pesticides for a number of reasons. Targeted pests don’t become resistant to pheromones in the same way they can adapt to insecticides. Biopesticides don’t kill or harm pollinators like bees, and other beneficial insects and wildlife. Furthermore, farm workers are spared the excess labor and chemical exposure needed to spray entire fields with traditional pesticides. With pheromones, there’s no re-entry period, or time—sometimes more than a month—when farmers have to stay out of an area recently sprayed with toxic chemicals.

Historically, pheromones—and specifically pheromone pesticides—have been prohibitively expensive. Before partnering with Semios, Freese had already implemented pheromone pesticides in his cherry orchards in order to disrupt codling moth mating. But it cost him up to $11,000 just for pheromone bands, a flexible adhesive fiber ring farmers can wrap around a tree trunk to emit pheromones and block climbing insects like caterpillars. When he factored in the entire week it takes his whole crew to install bands on over 100 acres, the actual cost was much higher.

“My thought was, let’s find a better cheaper way of making these [pheromone-based] products,” Gilbert explains. He focused on airborne, winged insects for a reason: it’s much harder to locate and target pests that crawl or burrow.

Over two years of intense research and development, Semios developed patented wireless monitors with radio signals that can connect through broad tree leaves. A leafy orchard can be a logistics nightmare when it comes to wireless technology. Gilbert says that contrary to what some might think, it’s easier for radio signals to travel through dense concrete city buildings than wet leaves blowing in the wind.

Freese reasoned paying $150 per acre for the complete Semios system—or $15,000 for 100 acres, by his back-of-the-envelope math—would produce at least a comparable result to his pheromone tree bands for the same amount of money. As an added bonus, Semios handles all the installation costs and maintenance on the hanging boxes, and also offers on-call support 24 hours a day.

Remote monitoring has saved the fruit farmer both time and energy by enabling acre-by-acre microanalysis. Instead of hiring consultants to walk in the fields, for example, a farmer can check the Semios dashboard on his phone and receive alerts when temperature drops in remote orchards. These early warnings could significantly improve crop yields.

When we spoke, Freese was just up from an early morning nap after a night out in the fields fighting frost. Being able to track temperatures in near-real-time in remote orchards miles away has been especially critical early in the growing seasons, when he can spot a cold patch in an orchard or note when a frost fan doesn’t kick on and send warm air to ground level before the temperature drops too low.

“Anybody else that fights frost in the spring,” Freese says, “I can’t believe they wouldn’t be excited about this technology.” 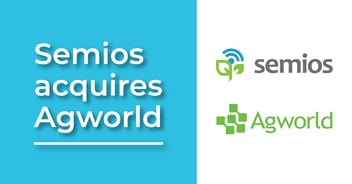 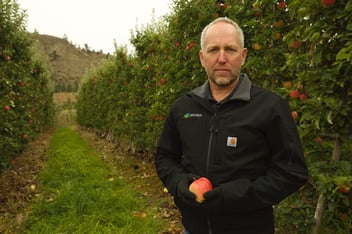