The Vancouver-based agriculture tech firm has announced a private capital infusion of $8 million, a $1-million grant from Agriculture Canada and two regulatory approvals by the U.S. Environmental Protection Agency and the State of California.

“These investors are very bullish on our technology and they have had success in the ag-tech space before,” said Semios CEO Michael Gilbert.

But that’s not all. After several years of field trials on the company’s pheromone-based insect control and precision temperature and moisture sensor systems, Semios will realize $2 million in positive cash flow this growing season from orchardists in B.C., Washington and California.

“That is going to be annual recurring revenue,” said Gilbert. Orchardists pay a subscription for the services and analytics provided by Semios, which can be accessed by computer or smartphone.

Semios systems use thousands of wireless sensors and real-time analytics to monitor temperature, soil moisture, disease and pest pressure in fruit and nut orchards and to direct exactly when and where to apply pest controls, water and other resources. Frost prediction helps direct planting and harvesting to reduce crop losses, while disease sensing informs precision application of anti-fungals.

“We want to be the new Farmers’ Almanac,”said Gilbert. “But instead of being accurate to within a few weeks we want to predict things like frost down to 12 hours. It’s a cruel trick of nature that the most frost-prone land is also the land that produces the best fruit.”

The federal investment — award through the Growing Forward 2 program — will be used to develop surveillance tools for fire blight in apples, and downy and powdery mildews in grapes, with field testing in locations across the country

Much of the private cash will be applied to expanding the firm’s data analytics department in an effort to develop new services for farmers from the tsunami of sensor data rolling in from clients.

With 50,000 sensors over 4,000 hectares reporting every 10 minutes, there is no shortage of Big Data to sift through.

“We could grow organically now that we have cash flow, but we would like to expand and hire analysts,” said Gilbert. “Everything in agriculture is driven by moisture and temperature and the relationships between them and other factors, so we know we can learn a lot more from that data about those relationships.”

Semios will also introduce new aerosol pheromone formulas for vineyards. The pheromone-based systems are designed to reduce or replace the use of toxic pesticides for insect control. 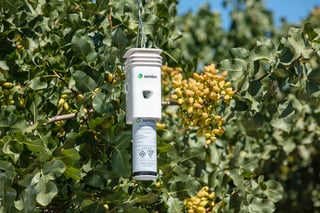 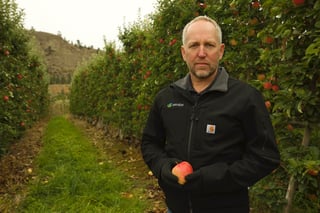