Don't like pesticides being sprayed on your fruit? Some farmers are now turning to the green alternative of pheromones, the alluring chemicals female insects use to attract males. Pheromones are scent-like chemical signals used by many animals to communicate. For example, they're emitted by a female moth, beetle or other insect as "come hither" calls to prospective suitors.

By spraying pheromones into the air in orchards and vineyards, farmers can confuse male insects into thinking that females are calling from all directions. The males go looking for love in all the wrong places, while the females wait helplessly for their calls to be answered — and the star-crossed lovers never find one another. Unable to mate, they don't produce babies — offspring that take the form of worms in the fruit we eat.

Pheromones have a number of advantages. Insecticides don't just kill pests, but also beneficial insects such as pollinators and pest-eating predators. Pheromones, on the other hand, are precisely targeted, because each insect species has its own chemically distinct pheromone.

That means a given pheromone can target just the single insect species that's causing damage "while in no shape or form affecting any other moth around or any other insect for that matter," says Michael Gilbert, CEO of Vancouver-based Semios, a company that makes high-tech automated systems for farms that dispense pheromones. Nor do pheromones affect any other organisms, including humans. They can be used by both organic and conventional growers.

David Knight, owner of Knights Appleden apple orchard in Colborne, Ont., has used Semios's system for the past two seasons as part of a regulatory trial. The system detects moths, and automatically dispenses pheromones as needed into the air as an aerosol spray. (It is not sprayed directly on the fruit). One dispenser is hung in each acre, and male insects are extremely sensitive, so only tiny amounts are needed — about two tablespoons per dispenser per year.

"It was fantastic for the simple fact that it is less costly than spraying [insecticides]," he said.

Insecticides aren't just expensive to buy, but also time-consuming and labour-intensive to apply, Knight said. And because they're toxic, workers can't enter the orchard for a certain number of days after spraying.

Knight says fruit growers like himself — who rely heavily on pollinators to produce their fruit — are also keenly aware of the environmental risk posed by pesticides.

While apples are vulnerable to many pests that can't be targeted with pheromones, including the apple maggot and fungal disease called apple scab, using the moth pheromones allowed Knight to eliminate one of three or four insecticide sprays per year from his orchard.

"It's a great PR thing for a business to say, 'This is what we're doing — we're actively reducing any chemicals we use,'" added Knight, who sells his apples to large supermarket chains such as Sobeys and Metro.

Based on the results of the trial, Semios got approval from Health Canada in May for the first aerosol pheromone on the national market, one that targets the oriental fruit moth, an invasive species that can damage a wide range of fruits, including apples, pears, cherries, apricots and peaches.

Gilbert says most other pheromones on the market have been passive sources — similar to a potpourri jar as opposed to a spray — that are far more labour intensive to use, requiring hundreds of dispensers per acre.

Kirk Hillier, a biologist at Acadia University who studies how insects communicate with pheromones, says pheromones are most typically used as lures for traps. Those are often used to monitor pest levels in order to optimize the timing of pesticide sprays and eliminate unnecessary sprays, although they can sometimes also eliminate insects directly.

He added that pheromones have been shown to be effective at controlling a variety of agricultural pests, including the grapevine borer in Italy, the red palm weevil, and boll weevils that attack cotton. They're also used in household traps for pests such as German cockroaches, and to monitor forestry pests such as the spruce budworm, gypsy moths and mountain pine beetles.

Pheromones, Hillier said, are still a niche market compared to the global insecticide market, which was worth $58.8 billion US in 2014, according to the business intelligence firm Mordor Intelligence. "Insecticides, if they work, will produce flawless fruit. And it's hard to compete with that," Hillier said.

Meanwhile, he added, "There are large chemical companies that back the use of pesticides, and they have a very vested interest in maintaining the status quo." Hillier is part of Green Insect Management Innovation and Knowledge, project in Atlantic Canada that aims to help bring more pest control pheromones to market.

Knight is one farmer who is already convinced of the value of pheromones. Following the trial, he decided to pay for a subscription to Semios's system for part of his farm (he couldn't afford it for all 240 hectares at once).

In addition to the pheromones, he also likes other "smart farm" features that come with the system, including sensors that measure temperature and moisture. They help predict the risk of other pests such as fire blight, helping reduce the amount of spraying required for those as well.

He thinks other farmers will soon follow suit. "I could see this technology be completely mainstream in our industry in the next five or six years."

Paired with wireless sensors and cameras, aerosol pheromone pesticides have entered a new era of... 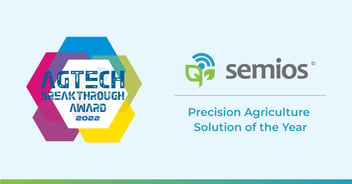