Precision agriculture isn’t just for cereal crops anymore. BC-based company, Semios is using wireless technology in orchards and vineyards to monitor pests and apply pheromones instead of commercial pesticides for crop protection. The system is a breakthrough for producers looking to reduce or replace insecticide controls, and is already expanding applications in orchard management.

Pheromones are chemical signals used by many animals to communicate. In agriculture, they are used to change or disrupt insect behaviors, like mating, to reduce populations. While they have long been recognized as a viable protection solution, there has been no reliable system to deliver them when and where they were needed – until now.

“We thought that perhaps technology could enable and improve adoption of pheromones in crop protection,” says Michael Gilbert, CEO of Semios. “Using our network, we deliver enough of the right pheromone at the right time to get the same effect as we would with other controls.”

The Semios system uses cellular networks to connect a system of sensors, including traps and monitors, to remotely trigger a high burst application of pheromones for specific pests from an aerosol dispenser. The work to develop and test the application was supported through the Canada-BC Agri-Innovation Program (Agri-Innovation) delivered by the Investment Agriculture Foundation of BC (IAF).

Using the Semios system farmers require only one can per acre instead of the 600-1000 of the pheromone dispensers used in passive release systems. Data is collected from the network of sensors, and delivered to an online control centre that producers can access from their computer or mobile devices. The network and equipment is managed by Semios when farmers subscribe to the service, reducing the risk of the investment and learning curve.

“We are talking about real time interactive control of these pests,” says Gilbert. “The way the system is built, growers from their phone can change when and where the pheromones are delivered on demand, and within 10 minutes every single sensor in their field will be on the new schedule.”

The system was first applied to control coddling moths in apples, and has since expanded to nine different pests in seven different crops across the United States, Europe and Canada. Currently 200 farms, representing 7000 acres of orchards and vineyards, are using the Semios system.

“IAF offered the first program to fund our agricultural projects, and they have been a great partner for us,” says Gilbert. “The adoption of our metered systems got us in to big farms, and allowed us to further develop the platform, and now we do everything from remotely monitoring insect pressure in real time, as well as disease risk, frost risk and soil moisture irrigation. We now have added all these modules that truly provide a platform for the grower looking to move into the next stage of precision farming.”

Funding for the Canada-BC Agri-Innovation Program is provided by Agriculture and Agri-Food Canada and the BC Ministry of Agriculture under Growing Forward 2, a federal-provincial-territorial initiative.
Funding is still available to support the commercialization and adoption of innovation projects that benefit individual enterprises and positively impact the BC agriculture and agri-foods sector as a whole.

Semios Goes To Bat For Bats

Bats play an important role in agricultural pest management and have been credited for up to $53... 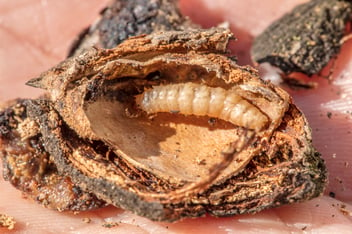