Did you know that post-harvest almond irrigation is one of the most important water applications of the year that can drastically affect your next season’s yields?

In this post, we’ll provide an overview of the impacts of post-harvest irrigation on the development of next year's crop and the recommended actions to take post-harvest. 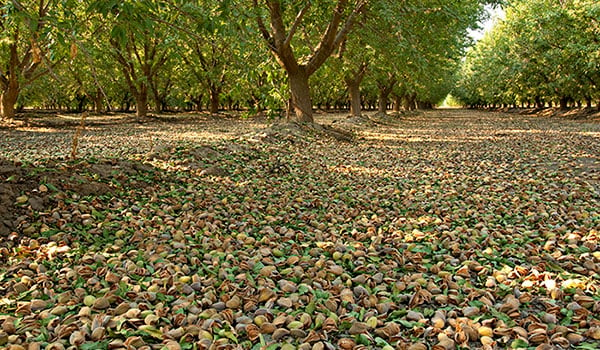 Harvest time at an almond orchard

What are the impacts of post-harvest irrigation on your bottom line?

Water is a scarce and expensive resource for Californian growers, but it’s important to properly allocate water for post-harvest irrigation since it can greatly affect your bottom line the following year.

By skipping post-harvest irrigation, trees had much lower yields the following season due to significant reductions in:

In the graph below, you can see the reductions in the following year’s kernel yield based on the three shortest pre-harvest irrigation cutoff times that the researchers observed: 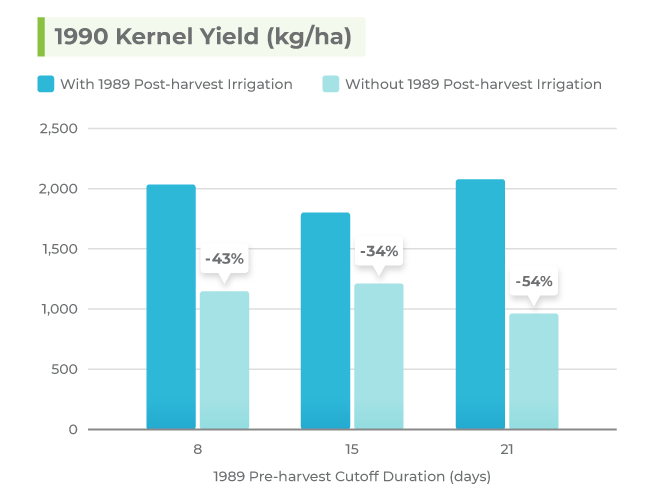 Why does post-harvest irrigation affect almond tree health and development?

The months of August and September signal both a busy time for almond growers and their trees. While growers have their hands full managing this year’s harvest, the development of almond trees towards next season’s yields is already underway.

During this time of the year, almond trees are experiencing bud differentiation. This is the process where vegetative buds transition into floral buds, which are responsible for fruit production. Compared to other tree crops, such as pistachios that can handle severe post-harvest water deficits without significant impacts, this is not the case with almond trees due to its late bud differentiation.

Because harvest and bud differentiation is around the same time for almonds, the trees are particularly sensitive to the impacts of post-harvest water deficits.

Dormant buds on an almond tree

With the common practice of irrigation cutoff at hull split, the soil water content is already largely depleted post-harvest. In combination with the fall rains not arriving until October or November, Californian almond orchards are prone to experiencing prolonged water stress if no post-harvest irrigation is applied. 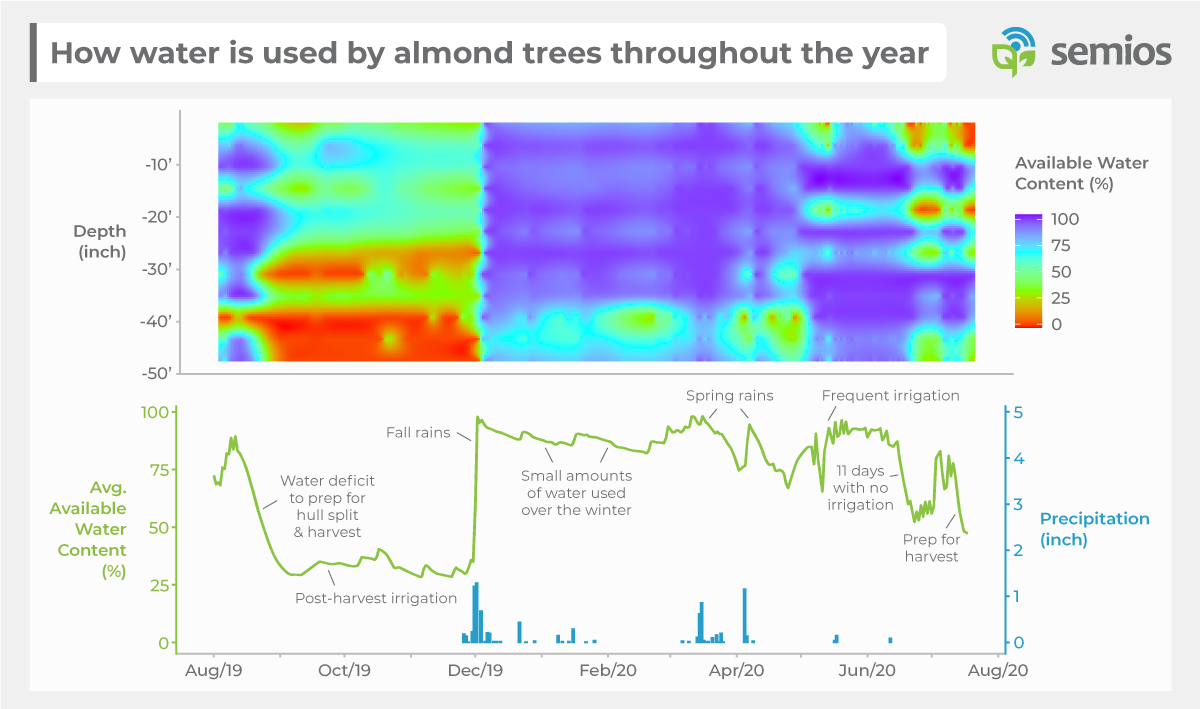 In this graph, you can clearly see the soil water content being depleted in the summer months leading up to harvest. Following harvest, there was some irrigation applied on several occasions to keep the leaves alive until the soil profile got replenished by rainfall. (Data collected by Semios soil moisture probes.)

The impacts of water stress post-harvest include poorer bloom development and fruit set the following year due to:

When trees are not fully defoliated, leaves can play an important role in the assimilation of carbon and mineral nutrients, and in sustaining root growth. Later, when leaves enter senescence, some of these nutrients are transported into the fruiting spurs.

Since almond trees already have reduced canopies from the irrigation cutoff and shaking process during harvest, it becomes critical to irrigate post-harvest to prevent further premature defoliation caused by water stress.

Another advantage of post-harvest irrigation is for leaching purposes. In drought years like this year, growers are relying more on pumping well water, which typically contains more salts. Throughout the season, the water is extracted and salts are left behind leaving a high concentration of salts in the soil. It is important to leach these salts during dormancy or winter months. So, how do we achieve this?

During harvest irrigations are reduced leaving the soil depleted. This is why it is important immediately after harvest to begin filling your soil profile with a little bit more water than what is needed in preparation for leaching. The idea here is to reach field capacity around late November or early December, to prepare for winter leaching irrigation that will push those salts downward and outward.

If your soil is depleted during these events, the salts will move from wettest to driest and back into the active root zone. In summary, you want to fill your profile with water in preparation for winter leaching irrigation to push salts downward and outward from the active root zone.

What does this all mean for almond growers?

It’s clear that the impacts of neglecting post-harvest irrigation are significant for next year’s harvest.

The good news for growers who have a tight water budget is that the trees don’t need that much water post-harvest. Not only do almond trees have fewer leaves after harvest, but they also no longer have nuts that demand a constant supply of carbohydrates. This means that the trees are capable of reducing their water use.

The goal is to irrigate enough post-harvest to keep the leaves alive until the fall rains come. 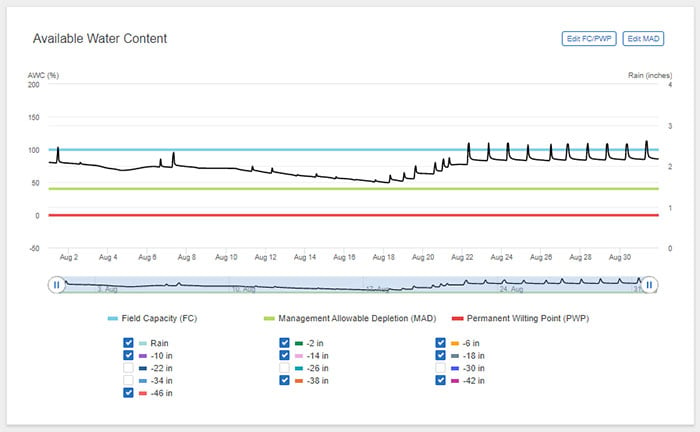 Growers can use Semios' Soil Moisture Monitoring (part of Semios’ Water Management Tools & Crop Management Platform) shown above to quickly assess the available water content (AWC) at various soil depths in the field, and see how their irrigation applications are changing the AWC.

You will need to put enough water in the soil post-harvest to prevent leaves from yellowing and dropping off. It is important to maintain this level of available water content in your soil until the soil profile gets refilled by rainfall later in the year. While moderate water stress is acceptable during this period, you want to avoid severe stress so you don’t compromise next year’s yields.

Want to learn more about how Semios can help?

If you have any questions about Semios or our water management tools, leave a comment below or contact us directly. 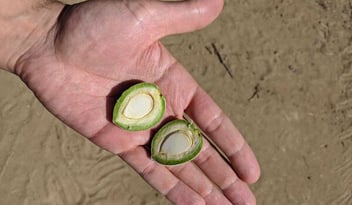 Late spring (late April to early June) is an important time in almond orchard development. During... 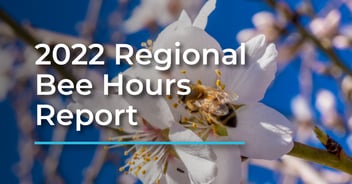 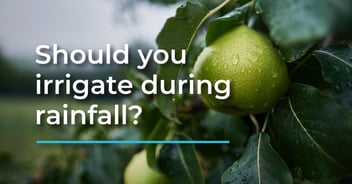 How Rain Can Impact Irrigation Planning

This week's irrigation blog is all about rain. We love it, we hate it.We need it, but we want it to...